Emma Halnan first came to prominence as the woodwind category winner of BBC Young Musician 2010. She has since appeared at major venues worldwide, and has performed concertos with orchestras such as the London Mozart Players and the European Union Chamber Orchestra. She has performed live on BBC Radio 3’s “In Tune” on multiple occasions. Emma won the Sussex Prize for Woodwind in the Royal Overseas League Competition 2019, and was selected as a “Making Music” Philip & Dorothy Green Young Artist 2018-20. Emma also won the Sir Karl Jenkins/Arts Club Classical Music Award 2016, in association with Classic FM.

Emma is also a highly reputed and very dedicated teacher. She teaches privately, at the University of Cambridge, and at Trinity Laban Conservatoire. She has recently been invited to give a masterclass at the Royal Academy of Music, and also to teach at the international Oxford Flute Summer School.

Emma studied at the Royal Academy of Music with William Bennett and Kate Hill, and previously with Anna Pope at the Purcell School of Music. She later studied privately with Robert Winn.

Find out more about Emma 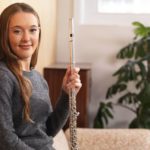 "Emma is an astonishing musician and is able to transfer her talent to her students making her an excellent teacher. She offers sensitive guidance with honest feedback that ensures each lesson is tailored to our daughter's needs. The lesson is rounded so that knowledge and understanding of each piece is gained, helping our daughter to develop her own thoughts and interpretation of the pieces. She is an inspiring role model who encourages and challenges our daughter."